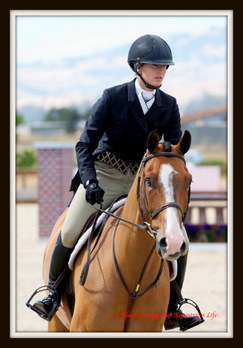 Hope Glynn with her husband Ned Glynn operate Sonoma Valley Stables in Petaluma, Ca. Hope has ridden and trained some of the top hunters going in the country including: Chance of Flurries, Circuit Champion High Performance Hunter Thermal 2011 and 2012; Woodstock, USEF Performance Hunter of the year 2011; and Roccoco, Thermal circuit Champion 2nd year green hunter 2011, Champion Hampton classic and winner of the $25,000 Franktown Meadows hunter derby. She finished in the top 25 of both the $100,000 USHJA Hunter Derby finals as well as the $500,000 HITS Hunter Prix finals. She traveled to the east coast in the fall of 2011and was champion and or reserve at Kentucky Bluegrass, Middleburg classic, HITS Saugerties, the Hampton Classic and Capitol Challenge with Chance of Flurries, Roccoco, Weatherly, Cr Haribo and Woodstock. CR Haribo was in the top 25 of the $100,000 derby finals, Weatherly and Erin Bland and Hope Glynn and Woodstock were in the top 25 of the $500,000 HITS hunter prix finals. Hope was Reserve Champion for the World Champion Hunter Rider program nationally in the emerging professional division. She won 12 derbies in 2011 and was recently awarded both the Arthur Hawkins trophy for Excellence in hunters as well as was inducted into the Sonoma County Equus Hall of Fame with her husband Ned Glynn

Hope was the leading lady hunter rider for NorCal and PCHA for 2011 and finished the year with 12 derby wins. She is a member of the USHJA $100,000 hunter club in which her open hunter and derby wins have exceeded $100,000. Hope is also a licensed hunter and hunt seat equitation judge, and is on the Zone 10 hunter committee as well as the USHJA hunter derby task force. Hope proudly wears Dameron stock ties and shadbelly points created by Dameron.